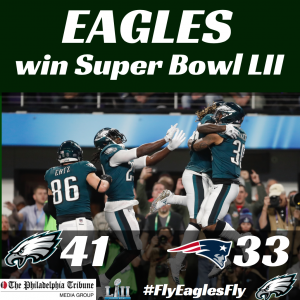 As a die-hard New York Giants fan, you may think that those words may sicken me. Well, years ago, there’s a good chance I’d be pretty pissed off today. And although this is still a pretty painful article for me to write, I realize that being annoyed would be a complete waste of my time and energy…

Rather than being disgusted and “hate” on the outcome, I now choose to learn the valuable lessons that sports can teach us about life. To me that’s way more important.

If we look a little deeper into what we witnessed yesterday, here’s what we’ll see.

The Eagles have been absolutely plagued with injuries this year, including their starting quarterback, Carson Wentz. To be successful you have to use what (or who) ya got. It would be easy to just throw in the towel and say “fuck it” when things don’t seem to be going your way. Sometimes you’re dealt a shitty hand, but that doesn’t mean you don’t have a chance to win. It just means that you might have to dig a little deeper and fight a little harder to get what you want. 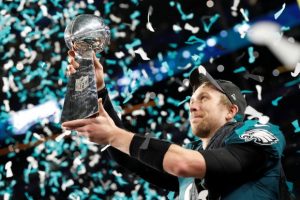 What we saw yesterday was a relentless effort to accomplish a goal. There was no “takin it easy” or “I don’t want to hurt anyone’s feelings” type of attitude by the Eagles. It was a group of individuals who came together and put their everything into every play, unapologetically. To be successful, you have to be relentless on your mission. No excuses, no apologies.

You’re facing the best coach and quarterback of all time, it’s fourth and goal and you can either play it safe and take the field goal or risk the points and go for the big score. Head Coach Doug Pederson chose to say “fuck you” and go for it! Then chose to go for it on another 4th down later in the game which also converted. Two crucial plays that helped lead to the Eagles victory.

Sometimes when we are faced with a big decision we get overcome by fear and let that fear blur our vision. Doug Pederson and the Eagles didn’t allow that, and you shouldn’t either. It’s important to recognize fear and acknowledge that it’s there. Shit, we’re human! However the difference between the successful and the unsuccessful, champions and runners up, is that they feel fear but then do what they know they should do anyway. Fuck fear.

When you’re an underdog in the biggest game around, there aren’t too many people that believe in you. Especially when you’re up against the best to ever do it. What we saw yesterday was a group of men that paid no mind to what the doubters and critics were saying. All they did was believe in each other and themselves. It didn’t matter what any outsider thought or said, they knew they were going to go out and play their game.

In your life you need to realize that there will be doubters. There will be haters and critics and all things alike. It is your duty to ignore these people. Pay them no mind and only focus on your true beliefs. The fire that burns deep down in your soul, that’s what matters. Ignore the bullshit. 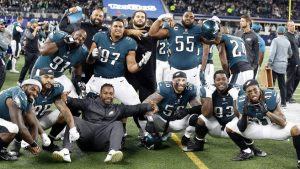 None of these things matter if the Eagles didn’t go out there and execute. When it comes to the general population, it seems that a lot of times people may have the right attitude, a great plan and belief, but they never get anywhere because they don’t execute! They don’t put in the consistent work it takes to be successful. If you want to achieve ANYTHING in your life, you have to understand that you are going to have to work like hell to do it. Nothing will be handed to you, you’re going to have to earn every ounce of it. Yesterday, Philadelphia did just that.

General Patton once said, “A good plan VIOLENTLY executed now is better than a perfect plan executed next week.” Don’t wait for perfect, hell, don’t wait for anything! Get to work NOW! 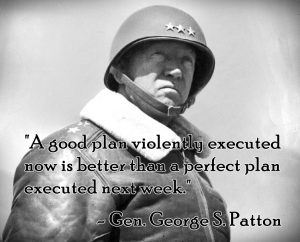 The older I get, the more I value these incredible lessons that sports can teach us. Instead of arguing who’s better, or what could have or should have happened, look more deeply into what you’re actually watching. These big games have a lot more meaning than pizza and booze. Those are just an added bonus…

Deep inside of you there is greatness. Instead of hating, LEARN from the greatness out there that we get to witness.

Apply these five things to your life and I know your 2018 will be your best year yet. Shit, I know I sure as hell will.

Congratulations to the Philadelphia Eagles on this well-deserved championship.

Thanks for reading, guys.